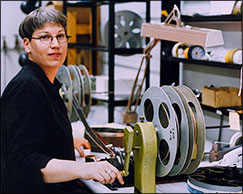 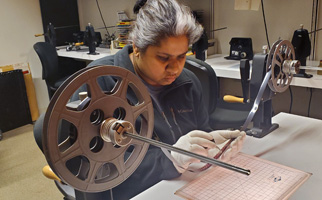 The Film Noir Foundation is proud to announce the recipient of this year's $5,000 FNF/Nancy Mysel Legacy Grant—Aparna Subramanian of NYU.

A few words from Aparna, who will receive her MA in Moving Image Archiving and Preservation in 2021 from the Department of Cinema Studies, Tisch School of the Arts, New York University:

"While working in India, I felt the lack of scope for archival training since there were no pan-Indian and pan-Asian programs for film preservation and archiving on any significant scale barring some limited private efforts. Coming to New York University (NYU) to study the Moving Image Archiving and Preservation (MIAP) program has been a step in the direction of formally educating myself in understanding the nuances of film preservation. Therefore, my current trajectory at the MIAP program is thoroughly facilitating my growth as a film archiving professional primarily to also facilitate a change in the archiving scenario in India and by extension South Asia. I am gaining exposure with classmates who are from diverse backgrounds. Their stories and experiences have helped me understand the state of affairs of motion picture and media archiving in their countries."

The FNF's charitable grant, funded by the Mysel family in honor of the late film preservationist Nancy Mysel who supervised FNF restorations of The Prowler and Cry Danger, grants funding to students enrolled in film restoration and preservation studies. The 2020 grant announcement was made Saturday night, February 1, at NOIR CITY 18 by festival host Eddie Muller, with a thoughtful video by Ms. Subramanian screened for the San Francisco audience.

The numerous grant applications received this year were impressive! The FNF encourages all students who weren't selected to reapply this upcoming December for the $5,000 FNF/Nancy Mysel Legacy Grant to be awarded in January 2021.

1. What do you hope to accomplish with a career in film restoration/preservation?

2. Why do you feel you have an aptitude for film restoration/ preservation work?

3. What related film preservation experience have you had and what impact has it had on you?

PREFERRED: Applications to be sent as PDFs to darylsparks57@gmail.com with the subject line:  2021 Grant Submission - Name of Applicant

The 2020 Nancy Mysel Legacy Grant recipient will be announced at NOIR CITY 19 in January 2021.

Applicants will be notified by email of the grant decision in mid-January 2021.

To apply for the grant, you must be a student currently enrolled in a college or university film preservation or moving image archive program.

It is not necessary to be a first-time Film Noir Foundation grant applicant. If you have applied before, but have not been awarded a grant, please re-apply.

Applicants confirm they are an undergraduate or graduate student currently enrolled in a film restoration/preservation or moving image archive studies program, and that they agree the grant funds will go toward their film preservation studies. At the end of the year, the FNF will ask the grant recipient for a short "How Was Your Year" essay.

The fortunes of the Film Noir Foundation suffered a devastating setback in 2012. Nancy Mysel, film preservationist for UCLA Film & Television Archive, who supervised our restorations of The Prowler and Cry Danger, lost a long-running battle with cancer.

What makes this tragedy all the more intolerable is that Nancy, only 45, had just begun her cherished career as a cinema savior. In a few short years, she had made an astounding impact managing superb restorations of many films. In addition to rescuing more than a few films noir, Nancy resurrected a vital facet of film history with preservations of Dorothy Arzner's pre-Code films made at Paramount in the early 1930s.

A native of Paterson, New Jersey, Nancy began work as a preservationist at Boston University. She'd worked at UCLA Film & Television Archive since 1999, benefiting from the tutelage of legendary UCLA preservationist Robert Gitt. Together, they restored more than two-and-a-half hours of outtakes to create the documentary Charles Laughton Directs 'The Night of the Hunter,' included in the 2011 Criterion DVD of the 1955 feature.

I can't overstate how essential Nancy was to our success. Her commitment to the highest level of restoration set an immense standard, which she challenged everyone to meet—including us. Although personally shy and self-effacing, she was a passionate preservationist and an exacting taskmaster. The best way we can honor her legacy is by ensuring that everything we do in the future measures up to her incredible standard of excellence.

Before her death, Nancy sent me the following note: "There's no denying working with you on our beloved genre provided the greatest opportunities and enjoyment of my career. That you were so much fun to work with is only the icing on the cake. The screening of Cry Danger at the Castro was a special highlight I was able to share with my family. Thank you again, and keep fighting the good fight!"

The FNF is proud to carry on Nancy's work with a huge assist from her family.  Funded by the Mysel family and created in Nancy's honor, The Nancy Mysel Legacy Grant – the FNF's charitable adjunct –- will grant funding to deserving students involved in cinema restoration. It's in the spirit of preservation and progress that we announce The Nancy Mysel Legacy Grant for 2020.

Surround yourself in a miasma of social media darkness: join us on Facebook, Tumblr and Twitter for a complete immersion in the world of film noir through film stills, posters, film clips, brilliant insights and more. Maybe you'll meet a dangerous stranger along the way.