Joseph H. Lewis never again matched the dizzying heights of the delirious masterpiece Gun Crazy, but he did create at least one additional classic in the noir canon. The Big Combo (1955) stars Cornel Wilde (also an uncredited producer) as a driven cop hounding preening mobster Richard Conte, an arrogant kingpin who has made sleek blonde debutante Jean Wallace his emotional slave. Lewis turns it all into a crime drama of obsession, megalomania, sexual submission, and sadism set in an abstract vision of big-city America. Collaborating with cinematographer extraordinaire John Alton, they transform small-budget sets into an austere, eerily empty world, a deserted landscape of cops, criminals, and denizens of the night, all delivered in a claustrophobic style drenched with death and doom. It's new on Kanopy from Kino Lorber; this new edition is superior to any of the versions streaming on Amazon Prime Video.

Also on Kanopy (also from Kino Lorber) is Carol Reed's Cold War euro noir The Man Between (1953) starring James Mason as a smoothly shady operative who targets a young British woman (Claire Bloom) on a day trip to East Germany, and The Bigamist (1953), Ida Lupino's independently-produced drama about a salesman (Edmond O'Brien) with a double life married to two women (Joan Fontaine and Lupino). While not exactly noir, it's a social drama invested with complex characters and conflicted motivations that gradually entrap the surprisingly sympathetic salesman.

Kanopy is a free streaming service available through most public library systems.

Film noir and classic horror have plenty in common, both visually and thematically, but they tend to take their shared elements (darkness, desire, greed, secrets, guilt, paranoia) in separate directions.

No one brought the two genres together more elegantly than producer Val Lewton. Kent Jones named him "The Man in the Shadows" in his 2007 documentary on Lewton, a reference both to working out of the limelight in the B-unit at RKO, and to the visual world he created. Criterion Channel presents all nine horror films he produced between 1942 and 1946, along with the Kent Jones documentary. All are worth seeing. A couple are brilliant fusings of horror and noir.

Cat People (1942) is a masterpiece of mood and psychological ambiguity masquerading as a cheap exploitation knock-off. Cheap it is, but Lewton and director Jacques Tourneur create mood not out of what is seen, but what isn't. Tourneur is a brilliant director of poetic horror and he slyly makes the connection between sex (both repressed and unleashed) and horror. And in collaboration with RKO house cinematographer Nicholas Musuraca, he creates evocative images using light and shadow; it's film noir in a dream realm.

An atmosphere of paranoia looms over The Seventh Victim (1943), which is even more noirish in its tale of a schoolteacher (Kim Hunter) and her black sheep sister (Jean Brooks), who has fled a group of Greenwich Village Satanists. Director Mark Robson has neither the style nor the psychological complexity of Tourneur but his straight-forward direction and almost mundane portrait of the middle-class Satanists makes an effective counterpoint to the gloomy art direction and the script's obsession with death. An unnerving sense of alienation and unease emerges.

Jacques Tourneur also directs The Leopard Man (1943), a murder mystery based on a Cornell Woolrich novel that Tourneur transforms into a supernatural horror featuring remarkable sequences (one involving the offscreen murder of a child), and Mark Robson helms The Ghost Ship (1943), a B-movie take on The Sea Wolf set on a "cursed" ship run by a captain who slowly transforms into a brutal, pitiless tyrant.

Here are a few more horror films with a twist of noir you can currently stream.

Invasion of the Body Snatchers (1956), the original version of the oft-filmed science-fiction horror, is still the most insidious alien invasion film ever made. Director Don Siegel (no stranger to noir) transforms a sunny California coastal town into a dark and forbidding world in which humans are transformed into emotionless beings trading personality and joie de vivre for ruthless efficiency and a hive mind. It's streaming on Criterion Channel and free on Kanopy.

Henri-Georges Clouzot's Diabolique (France, 1955) is as crisp and precise as anything in Hitchcock's canon. The icy thriller about a sickly wife (Vera Clouzot) and a mistreated mistress (Simone Signoret) who plot to kill the bullying, philandering headmaster (Paul Meurisse) of a provincial private school is a tale of grueling suspense and startling shocks set in an overcast world of decay. Streaming on Amazon Prime Video and Criterion Channel.

Turhan Bey plays a phony spiritualist preying upon tormented widow Lynn Bari in The Amazing Mr. X (1948), which uses ghosts and séances and voices from beyond as part of a confidence game. Noir master John Alton shoots the shadowy thriller, directed by Bernard Vorhaus. Streaming on Amazon Prime Video.

A true marriage of detective fiction and the supernatural, Cast a Deadly Spell (1991) stars Fred Ward as H. Philip Lovecraft, a rumpled, world-weary private eye in a 1940s Los Angeles underworld where everyone except Lovecraft uses spells and casual magic to get by. Hardboiled dialogue is tossed around between incantations and summoned demons. Streaming on Amazon Prime Video.

A Girl Walks Home Alone at Night (2014, with subtitles) is a strange and entrancing vampire movie from an Iranian-born, American-based filmmaker that stirs American movie references into a stylized Iranian noir. The vampire (Sheila Vand) wears a chador and rides a skateboard through her ghost town of a city (night-shrouded California locations subbing for Iran) and her boyfriend is part James Dean rebel, part street thug desperate to escape the life. It may not be scary, but it sure is stylish and fascinating. Streaming free on Kanopy. 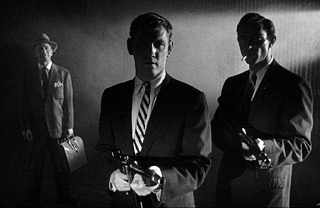 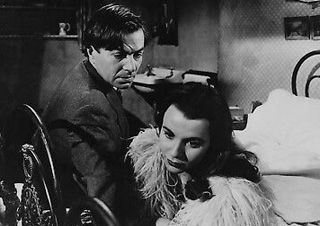 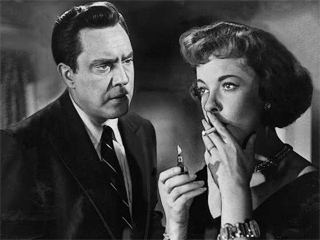 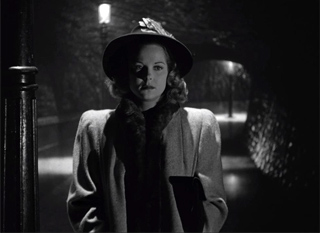 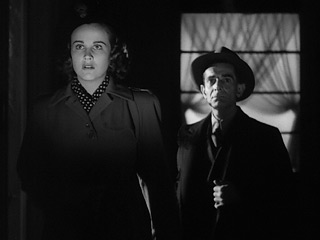 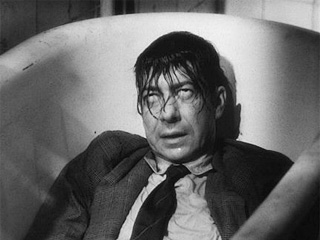 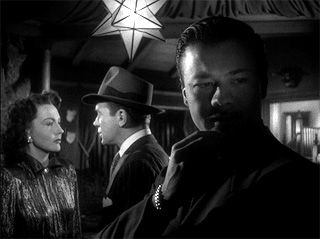 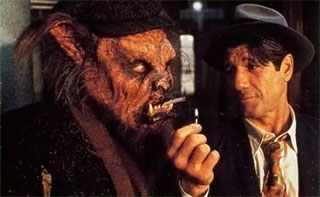 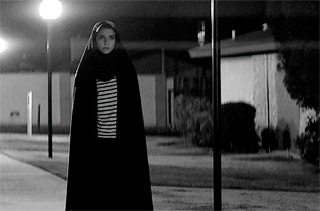 Surround yourself in a miasma of social media darkness: join us on Facebook, Tumblr and Twitter for a complete immersion in the world of film noir through film stills, posters, film clips, brilliant insights and mor e. Maybe you'll meet a dangerous stranger along the way.