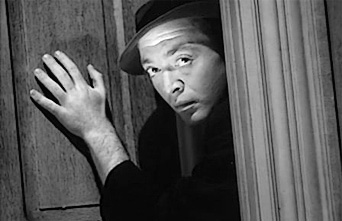 For a chance to win a copy of Warner Archive's DVD release of Stranger on the Third Floor (1940), donate $20 or more to the FNF between now and May 14. Your name will be entered in a random drawing. And, for a donation of $50 or more, a winner in a random drawing will receive Flicker Alley's Blu-ray/DVD release of the FNF's restoration of The Man Who Cheated Himself (1950).

Everyone who donates $20 or more and signs up on our e-mail list, will automatically receive the digital version of NOIR CITY e-magazine for a year! The current issue features Rachel Walther's Reluctant Hero: The Restless Charm of William Holden as well as articles on Stanley Baker, J.T. Walsh, Carlito's Way and more.

Already a NOIR CITY subscriber? We have drawings for you too! 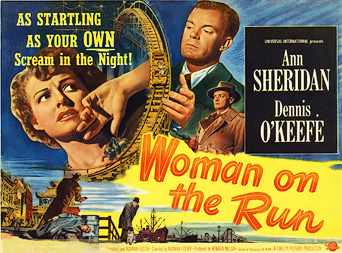 For $150+ donations, a winner in a random drawing will receive five FNF restorations on Blu-ray/DVD from Flicker Alley – Repeat Performance (1947), Los tallos amargos (Argentina 1956), La bestia debe morir (Argentina 1952), Woman on the Run (1950), and Too Late for Tears (1949) — all with FNF-produced special features.

For a shot any of these goods, make your donation to the FNF between now and May 14. Your name will be entered into the random drawings for your donation amount. All winners will be announced by Wednesday, May 18, here on the FNF's NEWS page. Your donations help the FNF locate, restore, and exhibit films that, without our intervention, would be lost forever. 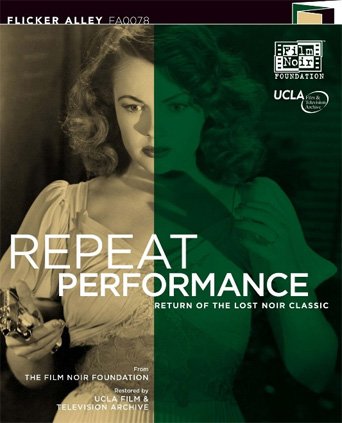 The FNF's restoration of Repeat Performance (1947) has been released in a beautiful Blu-ray/DVD combo set that includes extensive special features. Order your copy now from Flicker Alley. An amazingly original hybrid of film noir, supernatural fantasy, and backstage melodrama, the film stars Joan Leslie as a Broadway actress who magically relives the previous year of her life, but can she alter the fateful mistakes and misjudgments that led to a New Year's Eve tragedy? Think of it as film noir's answer to It's a Wonderful Life or a full-length precursor to The Twilight Zone. + READ MORE

The movie features an array of vivid performances by Joan Leslie in her first post-ingénue role, Louis Hayward, Virginia Field, Tom Conway, and Richard Basehart in his movie debut as poet William Williams, one of the era's most sensitive depictions of a gay artist.

In the years after its release, Repeat Performance seemingly vanished. For many who'd seen it, the film's startling premise and stunning set-pieces became merely a tantalizing memory. It fell so far off the cultural radar people began to think they'd only imagined the movie. But thanks to the dedication and diligence of the Film Noir Foundation, Repeat Performance was restored in 2012 in collaboration with UCLA Film & Television Archive and the Packard Humanities Institute. 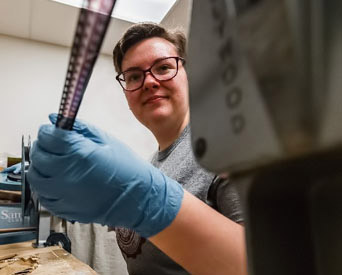 The Film Noir Foundation is proud to announce the recipient of this year's $5,000 FNF/Nancy Mysel Legacy Grant—Katie Higley. A McNair Scholar and student archival assistant at Central Michigan University, Katie Higley is the current student head of the CMU Clarke Historical Library's film project. In this capacity, she has processed film and created an encoded finding aid for the library's largest film collection, Channel 9&10 News. It was her work on this project that led Katie to apply for the McNair Scholars Program. + READ MORE

The FNF's charitable grant, funded by the Mysel family in honor of the late film preservationist Nancy Mysel who supervised FNF restorations of The Prowler and Cry Danger, grants funding to students enrolled in film restoration and preservation studies. The FNF congratulates Katie on her grant award!
↑ COLLAPSE 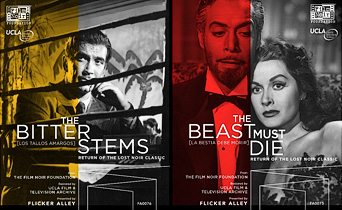 We are proud to announce the release of two FNF restorations as Blu-ray/DVD combos from Flicker Alley: The Bitter Stems and The Beast Must Die, two classics of Argentine noir.. →  READ MORE 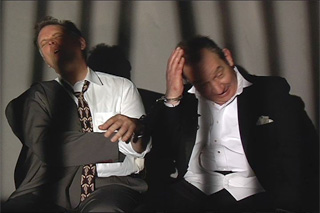 The NOIR CITY film festival has lost a bit of its soul. WILLIAM P. ARNEY aka "The Voice of NOIR CITY," died on Monday, September 27. He'd been battling an assortment of maladies over the past few months, but none that seemed lethal. In fact, Bill called me the day before he died and he sounded the same as always—charming and avuncular, with that gruff voice straight out of a 1940s film noir. An undetected virus in his lungs dropped him for the count the following day.

Bill and I had been friends from the moment we met, March 19, 2005. It was an event celebrating the American Library Association's declaration of landmark status for 891 Post St. in San Francisco. That's where Dashiell Hammett lived when he wrote The Maltese Falcon.→ READ MORE 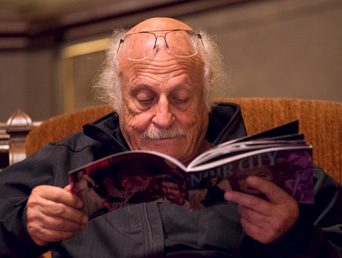 Yoram Kahana was one of the Film Noir Foundation's greatest allies. His association with us even pre-dates the FNF's creation. Our first meeting was at one of the earliest noir festivals at the Egyptian Theatre in Hollywood, presented in conjunction with the American Cinematheque. At the end of the evening Yoram approached me, the first time I'd ever seen what would become a familiar visage: the wil d tangle of white hair, the light-colored, lightweight, lived-in outfit (complete with photojourvalist vest) suggesting a war correspondent in some humid, hostile outpost (nah, just Hollywood). The bemused, crooked smile—and, of course, the gruff, almost indecipherable accent that prevented me from really knowing his name until I looked it up online. → READ MORE 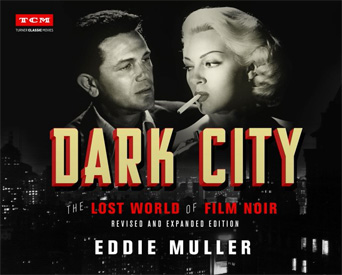 The revised and expanded edition of FNF prez and Noir Alley host Eddie Muller's Dark City: The Lost World of Film Noir is now available for purchase from the TCM Shop or your favorite bookseller.

Presented by Turner Classic Movies, Muller's film noir lover's bible takes readers on a tour of the urban landscape of the grim and gritty genre in a definitive, highly illustrated volume. Dark City expands with new chapters and a fresh collection of restored photos that illustrate the mythic landscape of the imagination. It's a place where the men and women who created film noir often find themselves dangling from the same sinister heights as the silver-screen characters to whom they gave life.

Muller guides fans on a spellbinding trip through treacherous terrain: Hollywood in the post-WWII years, where art, politics, scandal, style—and brilliant craftsmanship—produced a new approach to moviemaking, and a new type of cultural lore. This journey hits all the finer neighborhoods: Shamus Flats, Vixenville, Blind Alley, Losers' Lane—with stops at The Precinct, The Psych Ward, The Big House, and other dank corners, with shady protagonists ready to spill their bitter life story before retreating to the shadows. 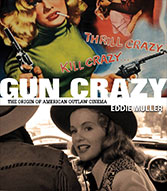 Gun Crazy caused barely a ripple in public consciousness when it hit movie screens in 1950. Yet over time it would prove to be the most innovative and provocative motion picture of its era—a simple genre film, but packed with so much cinematic bravura and timeless symbolism, its power has spanned decades, crossed oceans, and influenced countless filmmakers.
+ READ MORE

It's no stretch to declare Gun Crazy one of the essential American films—as well as a cornerstone of the auteur theory that's dominated cinema discourse since the 1960s. Its larger-than-life reputation among cinephiles has mainly been based on the recollections—also larger-than-life—of its director, Joseph H. Lewis, whose intriguing yet surprisingly short career never again reached the level of this bona-fide classic.

In this thoroughly researched and vividly told tale, FNF President and NOIR CITY co-programmer Eddie Muller explodes many of the entrenched myths about Gun Crazy—and the auteur theory itself. He subverts the film's legend with the fascinating story of its actual creation, a six-year struggle that involved an array of exceptional collaborators. Packed with never-before-seen ephemera—original script pages (some never filmed), production notes, on-set photos—Gun Crazy: The Origin of American Outlaw Cinema is now available for sale online exclusively from Black Pool Productions.
↑ COLLAPSE

Come follow us on Tumblr to indulge your passion for noir! We'll be posting daily, celebrating all things noir with exclusive stills and images you won't see anywhere else, as well as trailers, film clips, and more.

Share our posts with your friends; your love of the art form is the Foundation's biggest asset in its mission to preserve and restore classics of the genre. We are also fully committed to present our rescued films in the way they were meant to be seen: in 35mm at our NOIR CITY festivals around the country.

Did you know that The Film Noir Foundation has livestreams each month on our Facebook page in which Eddie Muller answers questions submitted by our e‑mail subscribers? All previous broadcasts are available on our YouTube broadcast archives page.

UPCOMING BROADCASTS
ASK EDDIE returns May 12 at 7 PM on Facebook and replays the following day on our YouTube channel. 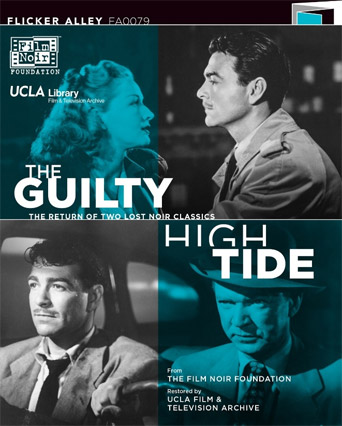 The FNF funded restorations of two 1947 film noirs, The Guilty and High Tide are now available for pre-order in a beautiful Blu-ray/DVD combo set that includes extensive special features from Flicker Alley. John Reinhardt's The Guilty centers on war veterans Mike Carr (Don Castle) and Johnny Dixon (Wally Cassell), roommates in a low-rent tenement. They are romantically entangled with twin sisters Estelle and Linda Mitchell (Bonita Granville, in a dual role). When one sister turns up dead, the boys are hounded by a suspicious police inspector (Regis Toomey). Working on only three sets, with a shoestring budget, Reinhardt and director of photography Henry Sharp evoke the dreadful, dead-of-night ambiance that was the domain of the era's most prolific noir scribe, Cornell Woolrich. The rarely seen noir has been restored from a 35mm nitrate composite fine-grain master by UCLA Film & Television Archive and is now presented in this world-premiere edition.

High Tide was the second of two crime thrillers independently produced in 1947 by Texas oil tycoon Jack Wrather. It carries over from The Guilty the same screenwriter and cameraman, the same protagonist in actor Don Castle, and the same director, John Reinhardt, whose playful inventiveness enlivened several post-WW II films noir. The action gets rolling with one of the greatest framing gimmicks in noir: a speeding car crashes onto a rocky shoreline and its occupants, newspaper editor Hugh Fresney (Lee Tracy) and private eye Tim Slade (Don Castle) recount the plot as the rising tide threatens to drown them. In flashback, we learn that Slade was brought in by muckraking editor Fresney as protection against a mobster (Anthony Warde) his paper is investigating. Things quickly get complicated as Fresney's boss has a wife (Julia Bishop) eager to resume a smoldering romance with Slade. This forgotten noir was rescued with the combined efforts of the FNF, UCLA Film & Television Archive, and the British Film Institute. Restoration funding was provided by the FNF in conjunction with the Packard Humanities Institute. 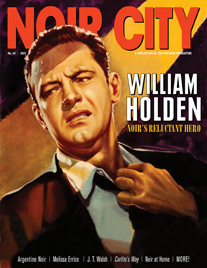 For access to the best writing on noir available today, and to enjoy one of the most cutting-edge interactive multimedia cinema publications in the world, subscribe to NOIR CITY®.

Start by adding your name to our mailing list and then making a donation to the FNF of $20 or more. View the Table of Contents for the current issue here.