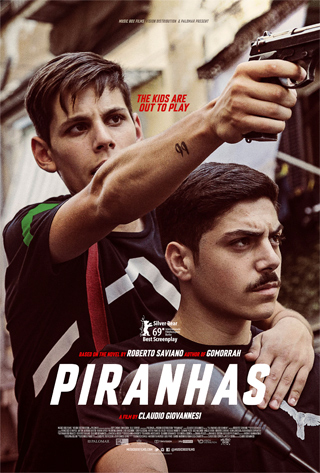 (Italy, 2019) Fifteen-year-old Nicola (Francesco Di Napoli) is a good kid in a bad situation. His Naples neighborhood is terrorized by gangsters and his single mother is barely holding on with the onerous protection money payments. So, this smart, ambitious kid organizes his buddies into a gang, appeals to the former neighborhood Don (now an outcast for turning informant) for weapons, and takes the neighborhood back.

Nicola has a romantic notion of the mobster as neighborhood protector and desperately wants the respect he imagines the old-school Dons commanded, but he's still just a kid with an immature gang he can't keep in check and territory that looks like easy pickings to rivals. That's one of the weaknesses of the film, based on a novel by Roberto Saviano (author of Gomorrah) and directed by Claudio Giovannesi (who helmed episodes of the Gomorrah TV series): their ascent comes too easily in this predatory underworld culture.

Di Napoli doesn't bring much personality to Nicola, and the rest of his pals are barely more than sketches. But Giovannesi never lets us forget the immaturity of these would-be mobsters. They take selfies with known gangsters, grab at their first guns like kids dazzled by a new toy, and learn to use their armory with YouTube videos. The buzz of the motor scooter—their mode of transportation—gives their first drive-by shooting all the dignity of kids staging a playground raid. The scrappy filmmaking and petty criminal antics fit the scale of this Gomorrah Jr.